Ancelin at the top of Mont Blanc, a challenging climb ! 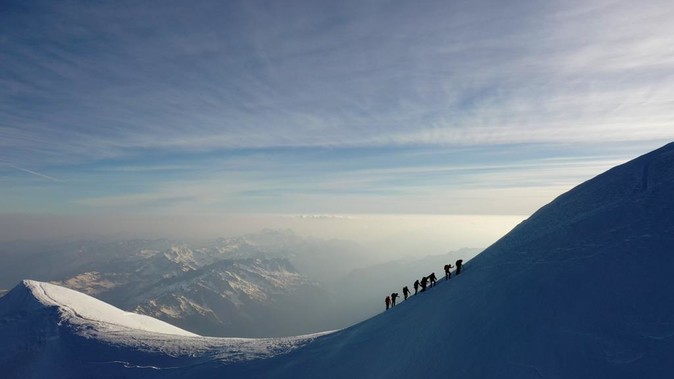 The ascent of Mont-Blanc with Ancelin, a 23-year-old disabled young man, is a large-scale project carried out as a team and at the initiative of Ancelin and his family this June 2021.

Member of the escalhanditreve association, Ancelin Margerie lives in Annecy-le-Vieux and suffers from a neurological disease that requires him to perpetually train himself to walk since he has no muscle memory.

Each year the association strives to set up a "mountain" project. It is a long adventure of which the ascent of Mont-Blanc is a completion. Ancelin has to his credit several climbs, rocky routes of several hundred meters and several peaks over 4000 meters. In his disability status, Ancelin is to be considered as a high level athlete.

As high mountain guide member of the Bureau des Guides d'Annecy, I met Ancelin ten years ago in the climbing hall of Annecy-le-Vieux, where Ancelin learned to climb. Climbing is a discipline that suits him perfectly. As soon as he's pronated and can push on his feet, he flies away !!! Ten years ago, Ancelin came to me saying: “Daniel, one day I want to climb Mont Blanc! " My first reaction was to tell myself that it is not impossible, but the step is very high!

We then carried out several evolutionary projects which allowed Ancelin to gain experience but also to get to know us. The project of the ascent of Mont-Blanc then takes shape and the date is set for the month of June 2021.

Many professionals then join the collective adventure with in particular the family, friends of Ancelin, the body. Medical staff, volunteers, mountain guides and a paraglider professional who will evolve under the watchful eye of Bruno Peyronnet, an image professional who has several award-winning mountain films for festivals.

In total, there will be 9 people for the ascent of Mont-Blanc including Ancelin, 1 cameraman and 3 high mountain guides in accordance with the ethical rules of the profession. Ancelin will perform the ascent by climbing and walking.

His approach requires the assistance of two people who maintain two bars for a question of balance. The absence of the eagle's nest train actually complicates the matter. Ancelin plans to do Mont-Blanc on his own. There is no question of carrying it or transporting it. Otherwise, we will turn around like a guide would with any client. The forecast conditions seem optimal for both the meteorology and the mountain conditions. Each project is filmed by a professional. 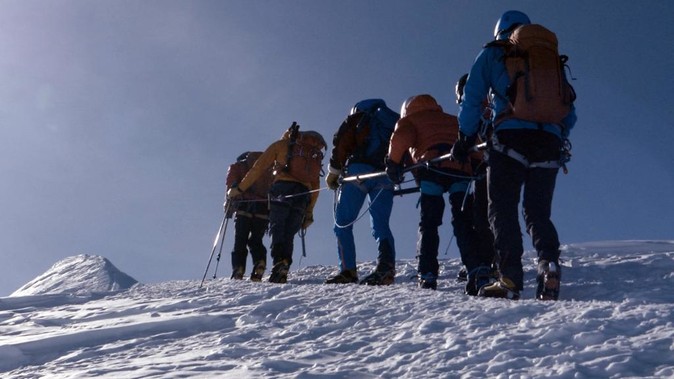 Weather forecasts were changeable and required continual adaptation. The experience of Yan, weather router emeritus of Chamonix, allowed us to validate the dates of the race.

Due to the heavy snowfall and the absence of the eagle's nest train (TMB) we tried a poker game to save Ancelin: make a paraglider approach. Vincent Sprungli pilot took off in a tandem from Planpraz in Chamonix. He succeeded in landing Ancelin on the edge of the Bionnassay glacier, between the Aigle refuge and that of Tête Rousse, where he was joined by the land team: Laure, Bernadette his mother, Pierre, Fabien, Bruno, Doumé , Marco and myself.

The climb to the Tête Rousse refuge was carried out under a beaurtiful sun.

First night in a refuge. On Tuesday June 15, in the cooler weather, we crossed the perfectly snow-covered snack corridor to arrive at the refuge of the same name (3800 meters above sea level) at midday. We alternated between progressing with the bars and climbing. Ancelin reacted perfectly well to the difficulties. Everyone needs a good rest for the next step: the summit.

Antoine, Ancelin’s brother, and Paul, a childhood friend, joined us for the climb. 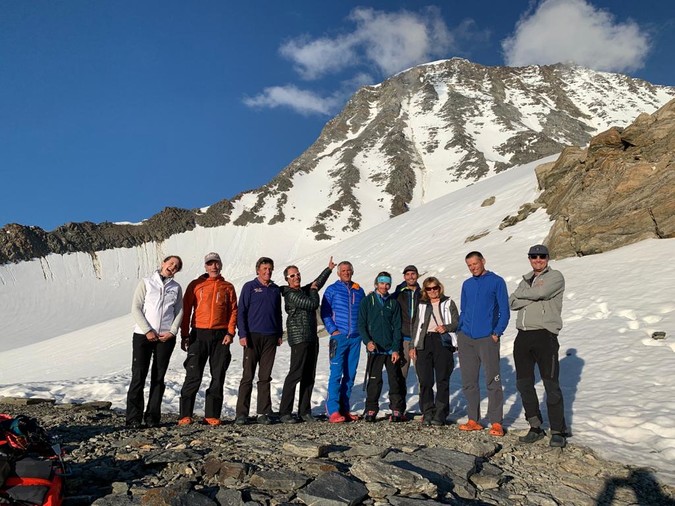 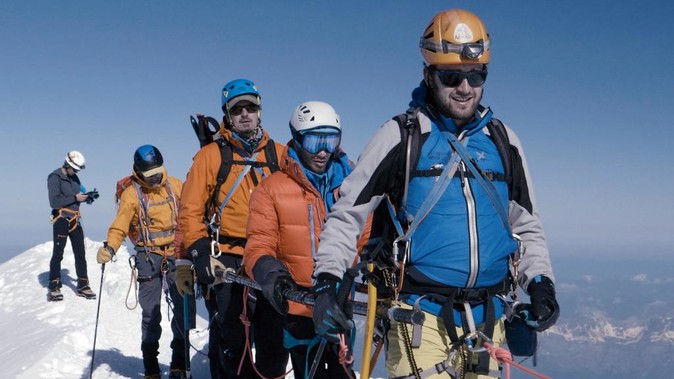 Breakfast at 1 am. Departure at 2 o'clock. After passing through the Dôme du Goûter, and a very decent walking pace, the Bosses Ridge is in sight. The conditions are perfect! The effects of altitude will not have a hold on Ancelin. The team is united and the crampons creak in unison under our feet. The jumps are absorbed and the summit is in sight.

At 9:15 am the summit is reached. We are all overwhelmed by emotions and the warm hugs make it clear that we have just had a great team adventure with Ancelin. This is an achievement for Ancelin !!! What pride to have been able to share this summit which will undoubtedly mark us all forever. What an example of will and fighting spirit on the part of Ancelin!

A few photos to immortalize the event and Ancelin takes off in paragliding with Vincent. Direction Chamonix after 1 hour of flight! 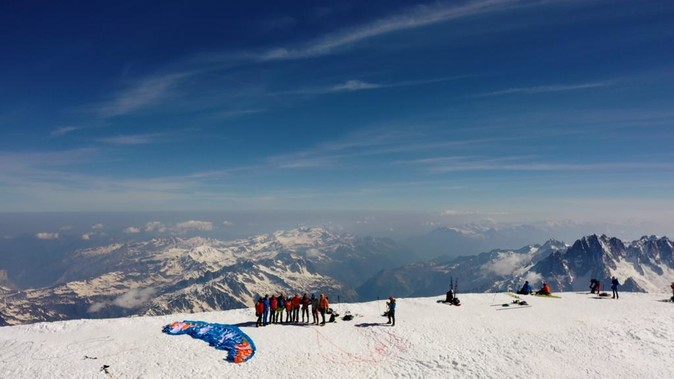 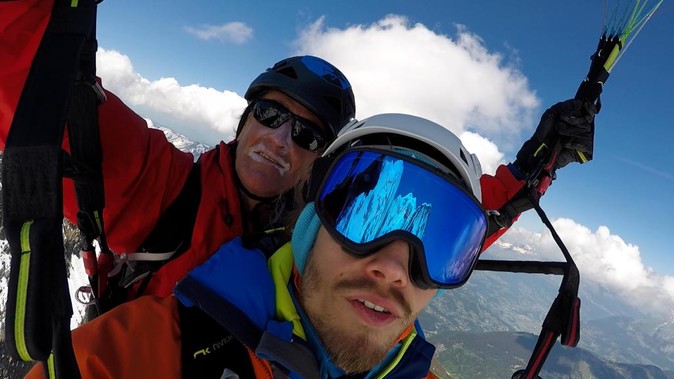 Let's go to Chamonix in paraglinding

In the final phase of the question concerning the chances of success, I mentioned the theory of Swiss Gruyère: "Try to find a piece of Gruyère in which the holes are aligned, allowing you to see through and through ..."

And the decisive word goes to "Doumé", Chamonix guide whom I absolutely wanted to involve in this project, benefiting from a solid experience with the world of disability who told me: "Daniel, I saw so many able-bodied people. turn around for trivial questions and so many “less able” people surpass themselves that nothing is impossible. SO LET'S GO !!!

Preparation, training, willpower, mountain conditions, weather, air conditions, mutual trust, everything turned out perfectly. Like what, we have to believe it !!!

Special thanks to Ancelin, the association, his family, volunteers and friends and to all the people involved in the project who were able to share their emotions and their race story.

If you wish to support the association, you can send your donations to the Escal 'Handi Trèves association via the website: https://escalhanditreve.wordpress.com/lassociation/