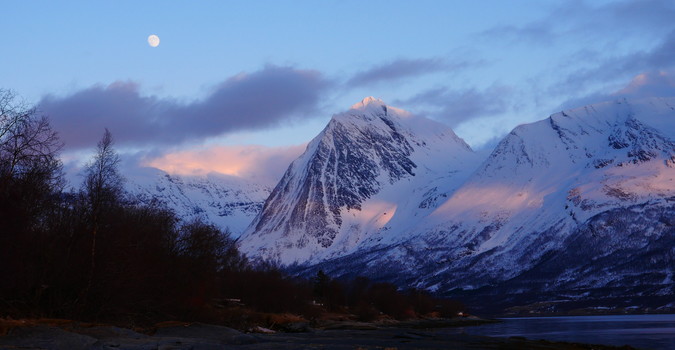 Now very popular, Norway has quickly become a destination of choice for ski touring and nature lovers: the vastness of its territory extending from south to north and its geographical position make today this region is a real El Dorado for adventure lovers in the vast expanses of white and cold.

There are 4 major provinces for ski touring or "freerando": the best known is undoubtedly the Lyngen Alps, a province that attracts skiers from all over the world looking for the proximity of water and mountains, the fjords Gigantic surrounding the slopes and for those who love the party, the evenings in the bars of Tromso often very animated.
The Lofoten Islands, both photogenic and impressive, the Lofoten are a little showcase of ski touring in Norway, the show offered by nature speaks for itself and the aurora borealis of early winter make these places magical.
Two other lesser-known provinces, which are just as popular for ski touring, are becoming ski favorites: they are Finnmark and Sunmores ... less frequented and a little less alpine, these two provinces remain really wild and It is not uncommon to meet no soul of the day during your Sunday ski outing.
Norway is above all a country that respects nature, humans and trolls.
During our last stay we were able to admire how much this country was attached to its natural heritage which makes it one of the most beautiful sanctuaries for animals, but also for men. 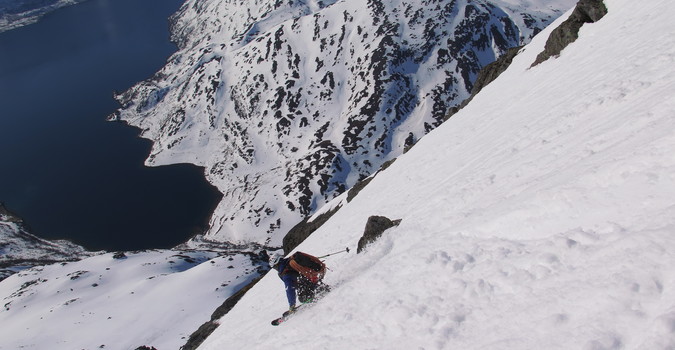 Last year with Cédric Pugin, Sophie Le Chasseur and Romain Rochet we explored in more detail the corridors of the Lyngen Alps: it is the most frequented region, but our initial plan was to go back to the Finnmark to ski in a corridor spotted last year during the shooting of the movie SKYFJORD 1 with Bruno Peyronnet; we had enjoyed exceptional conditions the previous year which allowed us to live in the norwegian, cod grilled by the fireside at night overlooking the fjord and wild camping and realize a maximum of virgin corridors and probably little or not explored before, but this year things have not been so obvious ....
Despite a first day of good weather in Tromso we were quickly informed that the conditions of the next 10 days would be low, enough to put all our happy team in the mood.
In the mountains, and especially when traveling, you have to know how to adapt your objectives to the weather and the terrain: so we have decided to choose corridors that are well stocked to benefit from good visibility but also to avoid an avalanche risk. potentially rising! So we opened the ball with the North Skarlestindenn couloir, a slope of 1000 m to 45/50 °, climbed entirely in the blizzard. We also realized that the rain had done its work and that the windy powder hid ugly patches of ice that surprised us if we pressed a little too much on the accelerator.
We were still happy to be able to ski this major corridor of the sector even if the blue sky was not at the rendezvous.
From galley to galley, we waited impatiently for the possible slots of good weather that would allow us to get out the skis but in fact we quickly realized that the rain was going to ravage all the corridors .... was not short of imagination to take care of us and Norway is not just about skiing, there's also fishing that you can practice anywhere, boating with a fisherman, surfing a few spots not far from the Lofoten, admire the magnificent aurora borealis ... or even drink a good coffee while talking with locals always very happy to see that we appreciate their country as much as ours and that we can circulate easily by car admiring the landscapes to they alone, a show. 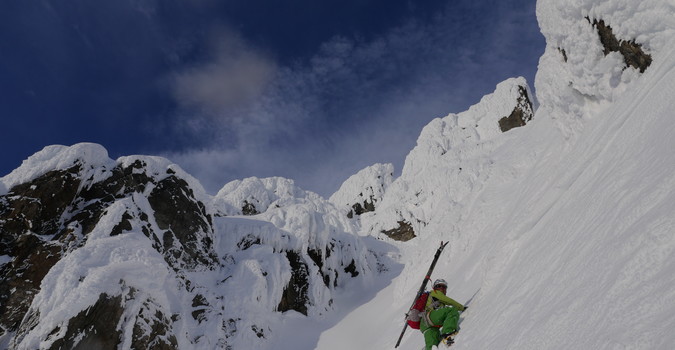 Norwegian Frost and Midnight Sun in the Anderstinden Gap (1525m)

Imposing rampart of corridor and chute of all kinds, the massif of Laskselvtinden is still a reference. After a good rain-freeze, we decided to try the hit on a corridor of more than 800m at 50/55 °, nothing was sure and we were still very afraid that the snowpack was too damaged by the rain: we had left for a mission of 6h which quickly turned into an epic of 12h in a technical corridor where the ice played us more than one bad trick! This adventure is still the most beautiful memory of the trip since we managed to pass through a beautiful sea of ​​clouds just before the summit in a gap hyper hyper and 55 ° tilt: it is in the last 100 meters with Cédric that we could use a new steep slope measuring scale: "The slope is steep when the climb, the spatulas touch the slope above you and the snow falls on your face", and there I must say that it was quite that ... After a good brewing of 10h, we realized that we reached the highest point at about 22h30 and the brightness was the same as the afternoon, or even better! No doubt we were in Norway ... 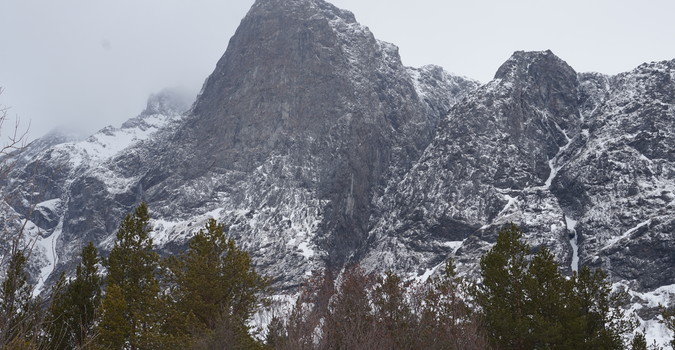 The unknown region of Moskodal

Last year, while filming in Finnmark, we met a Swedish "Linus", a passionate skier who roamed Norway with only his house, his car, and chained corridors and faces in the Norwegian Alps. , he had mentioned a hall spot that had caught his attention, it was in the region of Moskodal ... it is not described in any guide but we have set our sights on a cold day following a beautiful episode rainy ... This massif seems out of the ground in the middle of a huge fir forest! We had the impression of skiing in a corridor surrounded by dolomites with flakes as big as the fist falling from the sky. Once again, the ice cream was right of our good will and our motivation, pushing us to turn back before the top of the corridor ... We were horribly disappointed not to have been able to discover this massive with the very interesting potential, of more so than the surrounding accommodation seemed very welcoming and less expensive than in the tourist areas of Lyngen. 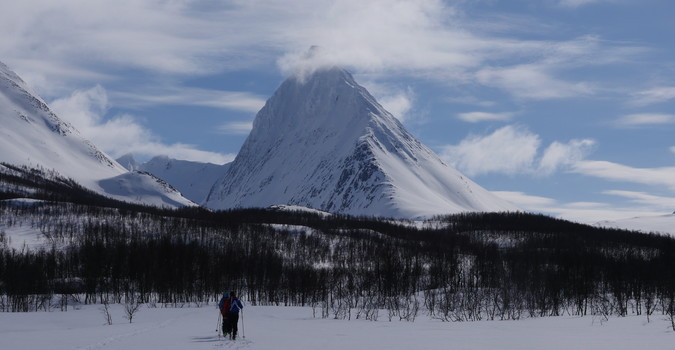 The Piggtinden, the sharp peak that is envied (1505m)

It was the end of the stay and we had not had a single day of good weather! Naturally, it is when we go away that the sun comes back, so we took advantage of this chance to make a beautiful slope that would change our abominable previous projects. The Piggtinden is a magnificent Pyramid of 1400m (slope) which by far makes you vibrate, the boat trip can not access it and it is therefore a good point because the attendance is less. Again, we were well done by the Norwegian weather that had promised us a bright sky since we found ourselves in the cloud, which like a hat, just encompassed this unique peak of the Alps Lyngen ... When we have the bad luck, it's all the way down ... we just had to go down in the fog again to see if the reindeer herds that populate the base of this natural pyramid did not have a secret to predict the weather for these places. Anyway it was time for us to go back to France full of head shots, we had hurried from Tromso to Alta Quasiment to try to find the best skis with a chaotic weather, and we learned that in this kind of situation, you have to know how to be patient and resign yourself to discover the country from all angles

Summer is coming in Annecy Mountains
Prepare your gear