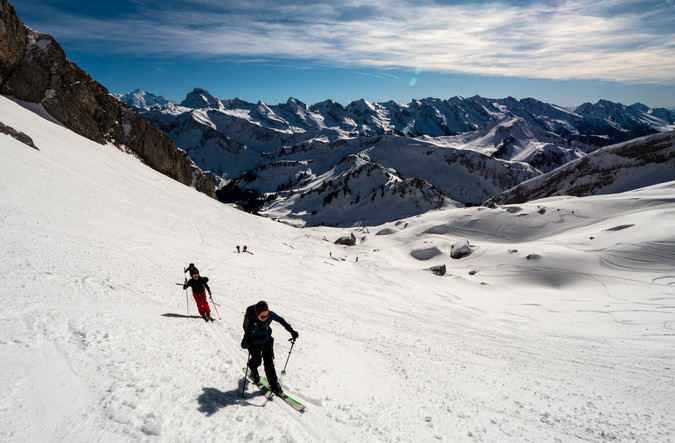 If you come to ski in the Aravis, Thônes is the ideal base camp, 20 minutes from Annecy between Bornes and Aravis. There are many possibilities for accommodation in this village which is still a very nice market town. The advantage is to access the various valleys and surrounding massifs by limiting the distance by car while optimizing the variety of routes. Numerous departures within 20 minutes by car allow you to choose the difference in level, the level of the slope, the exposure in order to optimize the quality of the snow and to choose to be in the sun as soon as possible, especially at Christmas until 'in February. We ski in a pastoral environment. The forests reach up to 1600m, but there are many meadows and forest paths that allow you to ski without problem below this altitude. Above 1600m up to 2000m / 2500m it is often high altitude meadow allowing many possibilities, even with little snowfall. However, we remain cautious to adapt to the conditions (snow cover, snowfall, exposure to wind, etc.) and thus avoid any risk of injury and / or avalanche. The landscapes are extraordinary: it's crazy how the Reblochon gives us beautiful landscapes ... So much so it is true that these mountains are shaped by pastoral activity: which facilitates access and really embellishes the landscape between alpine chalets , exploitation of meadows and forests. There is no glacier to cross here, which does not limit the spectacular side of the Aravis, bristling with rocky peaks. If you feel like going on the glaciers, you can go for a walk during the week in Chamonix, for example (allow an hour by car). Here is a selection of classic hikes in order of physical and technical progress. The itineraries are many and varied, so the list is not exhaustive. We can meet again next year for other suggestions for ski touring routes.

The mountain of Sulens is the reference exit to start in the region. It is so beautiful and complete that all audiences can find themselves there, even if it means climbing and descending twice in a row to reach the magic number of 1000m ski touring. The changes of orientation and its position as a central belvedere offer wide landscapes, each as enchanting as the next.

Let's start at the beginning: a forest path allows you to warm up gently on the way up. It has the particularity of being quite wide on the descent and well groomed by passages for beginners. For the strongest, we will race there: the last at the bar restaurant of the col de plan bois pays his round.

Although the slopes are very largely marked out in the fresh snow, it is recommended to follow the classic route which takes the obvious valley facing West until the “Sulens pass” (not marked on the map near the southern summit1759 m) then, follow the ridge to the northern summit.

Although accessible, the terrain off the route is avalanche. Stay alert. Now is a great time to learn map reading and recognize directions before you actually need to. 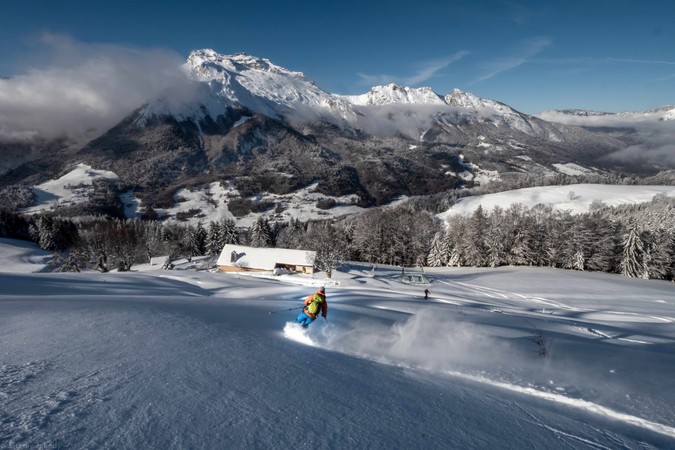 Bucolic or idyllic, hard to choose to describe this ski tour. While putting on shoes in La Savatte, eyes first crossed the village chalets before slipping, from clearing to clearing, between the coniferous beds. Try to stay aligned on a heading to the east in order to hope to keep the pass in sight when exiting the forests. Looking up from the spatulas, we appreciate the alpine chalets, Les Fontanettes, Aulp de Marlens. The slope calms down, but the "flat" of the ovens often bears its name too aptly if one has dragged it out. Here we are aware of the distances in the mountains!

The pass is now within reach of skis. But the slope is recovering and conversions have to be resumed, bypassing the projections to the west and being wary, in the event of questionable snow levels, of counter slopes on either side of the pass.

Once at the pass, it is advisable to contemplate the horizon that emerges from the sources of the Fier, without however tipping over: steep slopes!

Descent in the wake of the ascent, as you wish…. But if a feeling of not enough arises, the Col des Porthets or the Combe à l'Avion are all close, on a slightly higher level. 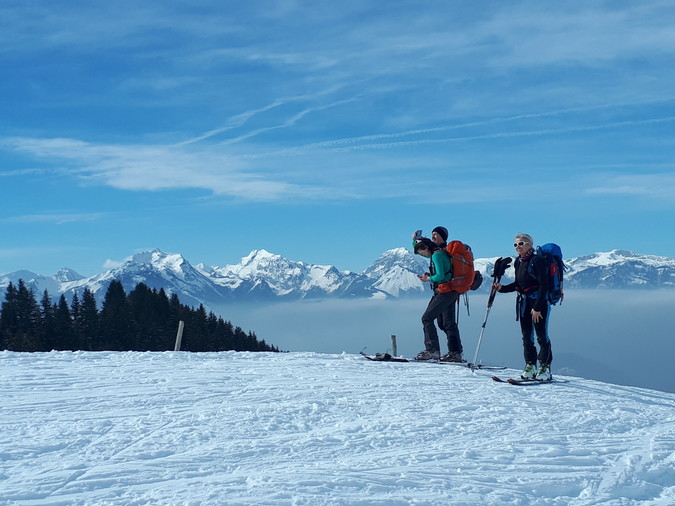 Curious road approach for this wide angle hike. Returning to the “Sous l'Aiguille” car park is more like reaching a sinister cold pit than a paradise of beautiful bends generously sunny, and yet ... The snow-covered road allows you to warm up gently during the first 200 meters. .

Around 1430m, it is advisable to start observing. The forest clears up and invites you to ask the first snow questions under its steep slopes, unfortunately South East. Renounce ? Accelerate? Concentrate on the route which goes well to the left when crossing, often in the balls of old avalanches.

The pressure drops to 1540m. Aulp de Fier from above or below depending on the mood, then on sight towards this pass located between La Rouelle (2082m) and Tête de l'Aulp (2129m). The slope recovers, the conversions become technical, it may even be necessary to take off your shoes before reaching the pass…. Watch out for the ledge as you contemplate the impressive southern slope and the panorama it sublimates.

The descent is to be savored; Also optional (via the head for steep enthusiasts, via the Aulp from above, from below?). The beautiful curves are here, take the time. Then the game continues in the final boarder cross. Sensitive souls refrain. 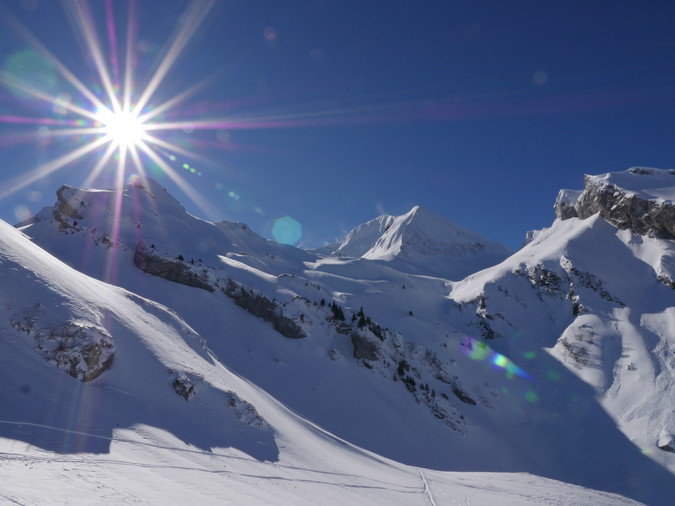 Duration: half day: departure 9 am return 2 pm
This summit is an excellent belvedere to the south of the Aravis range in the heart of Mont Blanc country in the Natura 2000 protected area offered by the Aravis. In the east, the Fiz and platé (Flaine); to the south-east a breathtaking view of the Mont Blanc range, to the south (Mégève) and to the west the valley of Savoy (Albertville).

Apart from being scenic, these accessible summits are very skiable on gentle and regular slopes. The small Croisse Baulet can be walked with avalanche snow conditions. He's not exposed. We must be more careful for the Big One.

This is typically the kind of terrain that allows you to master - during a nice outing - the different terrains: short crossings of forests, climb a ridge, mastery of conversions, while remaining accessible. La Giettaz, the starting point, is a picturesque village with a popular “little” ski resort in the region. A mountain with a human dimension. Another access is possible from Megève, even in case of crowds on beautiful sunny days: there will be room! 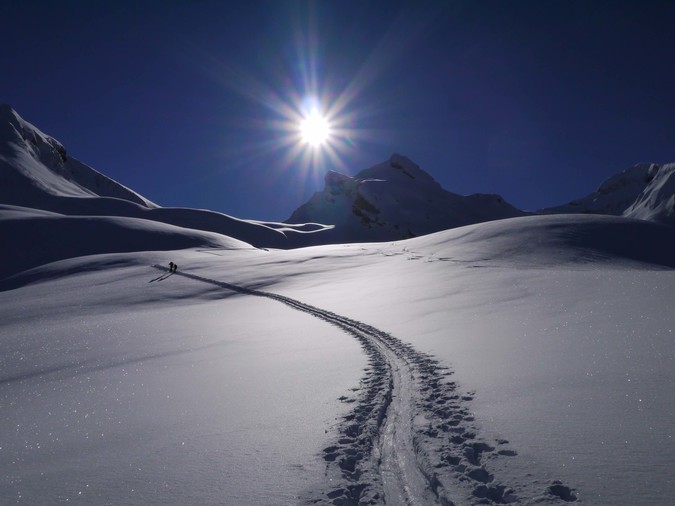 Let's take our distance a little, but while staying close all the same. The Croix d'Almet area is a massif in its own right. These prestigious neighbors (from Jallouvre to Bargy), however, make it a destination not very popular with ski hikers.
Starting from Chinaillon, the ascent of the head of Auferrand via the North East combe (and not via the North West combe, which is snow more complicated) offers a pleasant, varied and instructive ascent. You can easily reach the col de la Colombière, then the chalets of Auferrand, before having to play with sound sense of direction, compass readings ... or GPS to slalom between clearings and islets of coniferous trees to the obvious valley oriented NE. It will then be necessary to go up this same valley until a small pass located under, apparently impregnable, objective perched 100m above and protected by steep “inskiable” slopes.

From the pass which dominates the north-west slope, you have to reach, after asking yourself the right questions about the state of the snowpack, by crossing, sometimes a ledge passage, the west ridge coming from the head of Auferrand , which we will climb, in a good ski tightrope walker, to the panoramic summit. Does the Almet Cross look on you? It's normal!

Have a good descent! 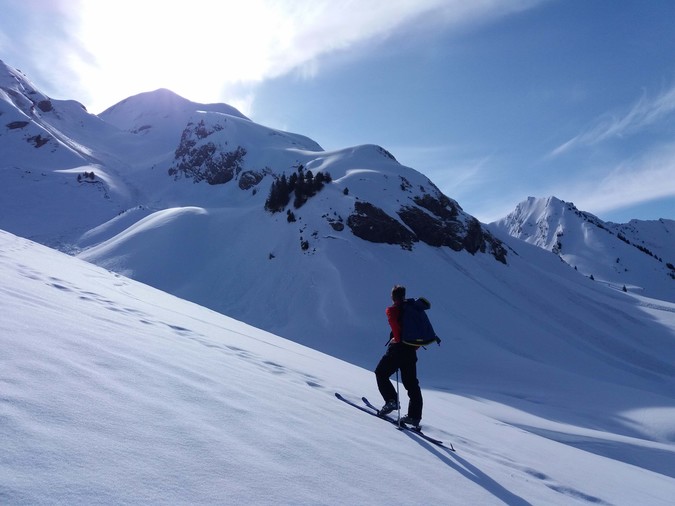